Use of quotes (simple, double)

Editing is to be performed only when a string exceeds what the transcriber deems to be acceptable standards of readability. Please keep in mind that the whole meaning of the sentence has to be conveyed.

When a sentence is broken into two or more strings, it should be divided at a logical point where speech normally pauses, or at a convenient point grammatically, so as to ensure that the 70-character-per-string guideline is always respected. 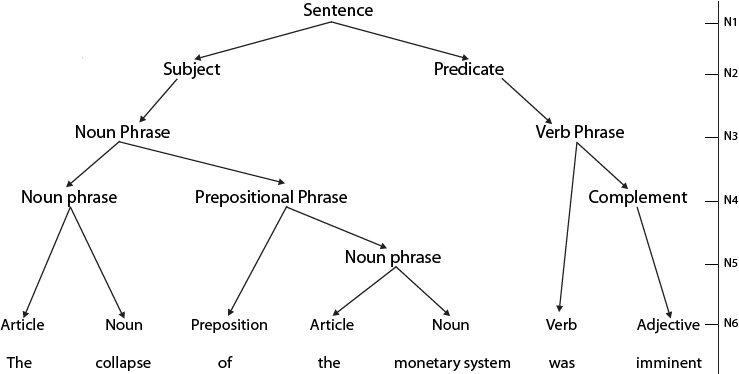 As the diagram above indicates, we have broken down the sentence "The collapse of the money system was imminent" into its different constituents, from a general perspective (on top, node N1), to the precise context of the word (bottom, node N6). As a general rule, a transcriber must strive to divide strings at the highest node level possible..

If we take the sentence shown in the diagram, we can have the following divisions :
Division at the fifth node (N5) :

"The collapse of the
money system was imminent"

Division at the second node (N2) :

"The collapse of the money system
was imminent"

In this example, the second string division is more appropriate, as we try to convey pieces of information that are as complete as possible, so that our brains don't have to strain too much to put the sentence together. The text flows better, allowing for a more comfortable read, thus enabling a better understanding of the information.

The following section describes some good practice in terms of line division, with excerpts from the video Jacque Fresco's full interview with Larry King, 1974[1]

1. Do not break a modifier from the word it modifies.

2. Do not break a prepositional phrase.

3. Do not break a person’s name nor a title from the name with which it is associated.

4. Do not break a string after a conjunction.

5. Do not break an auxiliary verb from the word it modifies.

6. Never end a sentence and begin a new sentence on the same line unless they are short, related sentences containing one or two words. From Zeitgeist Moving Forward :